Everything I Never Told You Reader’s Guide 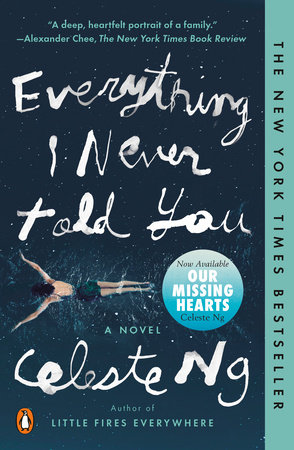 Everything I Never Told You Reader’s Guide

print
Everything I Never Told You Reader’s Guide

A Conversation with Celeste Ng

Thank you for choosing Everything I Never Told You for your book club!

Everything I Never Told You is the story of the Lees, a Chinese American family living in 1970s small-town Ohio. Marilyn and James are determined that Lydia, the middle and favorite child, will fulfill the dreams they were unable to pursue: for Marilyn, that her daughter becomes a doctor; for James, that Lydia is popular at school, a girl with a busy social life and the center of every party.

When Lydia’s body is found in the local lake, the delicate balancing act that has been keeping the Lee family together is destroyed. James, consumed by guilt, sets out on a reckless path that may destroy his marriage. Marilyn, devastated and vengeful, is determined to find a responsible party, no matter what the cost. Lydia’s older brother, Nathan, is certain that the neighborhood bad boy, Jack, is somehow involved. But it’s the youngest of the family—Hannah—who observes far more than anyone realizes and who may be the only one who knows the truth about what happened.

Although the novel takes place in the 1970s, many of the issues the characters face are just as relevant today. Those who are different—racially, culturally, or in any other way—still find themselves pressured to be someone they’re not. Many more routes are open to women today, especially in medicine and science, but women still wrestle to balance careers and personal lives, trying to align what their families need and what they themselves want—as well as society’s expectations of what women, wives, and mothers should be. And, of course, parents yearn to make a better life for their children while the children themselves often feel defined (and confined) by their parents’ dreams.

In writing Everything I Never Told You, I was surprised to remember how different things were just a generation or two ago—and how much they’ve stayed the same. Why do we keep secrets, even from those we love most? How well do we ever really know each other? What do we expect of our children, and of our parents? And what holds families together, even in the face of unthinkable tragedies?

I hope you enjoy the novel, and I hope it sparks lots of interesting discussion for your group!

Questions and Topics for Discussion

1. Discuss the relationships between Nath, Lydia, and Hannah. How do the siblings both understand and mystify one another?

3. “So part of him wanted to tell Nath that he knew: what it was like to be teased, what it was like to never fit in. The other part of him wanted to shake his son, to slap him. To shape him into something different. . . . When Marilyn asked what happened, James said merely, with a wave of the hand, ‘Some kids teased him at the pool yesterday. He needs to learn to take a joke.’”

How did you react to the “Marco Polo” pool scene with James and Nath? What do you think of James’s decision?

4. Discuss a situation in which you’ve felt like an outsider. How do the members of the Lee family deal with being measured against stereotypes and others’ perceptions?

6. What would have happened if Lydia had reached the dock? Do you think she would have been able to change her parents’ views and expectations of her?

7. This novel says a great deal about the influence our parents can have on us. Do you think the same issues will affect the next generation of Lees? How did your parents influence your childhood?

8. “It struck her then, as if someone had said it aloud: her mother was dead, and the only thing worth remembering about her, in the end, was that she cooked. Marilyn thought uneasily of her own life, of hours spent making breakfasts, serving dinners, packing lunches into neat paper bags.”

Discuss the relationship Marilyn and her mother have to cooking and their roles as stay-at-home mothers. Do you think one is happier or more satisfied?

9. The footprint on the ceiling brings Nath and Lydia closer when they are young, and later, Hannah and James discover it together and laugh. What other objects bring the characters closer together or drive them further apart?

10. There’s so much that the characters keep to themselves. What do you wish they had shared with one another? Do you think an ability to better express themselves would have changed the outcome of the book?

Celeste Ng grew up in Pittsburgh, Pennsylvania, and Shaker Heights, Ohio, in a family of scientists. She attended Harvard University and earned an MFA from the University of Michigan (now the Helen Zell Writers’ Program at the University of Michigan), where she won the Hopwood Award. Her fiction and essays have appeared in One Story, TriQuarterly, Bellevue Literary Review, the Kenyon Review Online, and elsewhere, and she is the recipient of the Pushcart Prize. She lives in Cambridge, Massachusetts, with her husband and son.

Fiction on families, love, and loss

Amy and Isabelle by Elizabeth Strout: One of the most potent explorations I’ve read of mother-daughter relationships and the effects long-held secrets can have on a family.

The Love Wife by Gish Jen: A masterful portrait of a contemporary mixed family and the shifting identities, loyalties, and fault lines between its members.

A Friend of the Family by Lauren Grodstein: When his son falls for a woman with a shocking past, a devoted father sets out to derail the relationship—raising the question of how far we’ll go to protect our children and our hopes for them.

The Dogs of Babel by Carolyn Parkhurst: A haunting story about a man determined to understand whether his wife’s death was accident or suicide—but at what emotional cost?

The Family Fang by Kevin Wilson: Simultaneously hilarious and heartbreaking, this novel follows the members of a family of famous performance artists as the children try to create their own lives in the shadow of their parents’ influence.

Part Asian, 100% Hapa by Kip Fulbeck: Based on “The Hapa Project,” these photos of part Asian people of all ages—and their answers to the question “What are you?”—are beautiful and thought-provoking.

The Chinese in America: A Narrative History by Iris Chang: A highly readable history for those interested in learning more about the history of Chinese Americans.
Learn More About Everything I Never Told You
print

And the Mountains Echoed
Khaled Hosseini

The Silent Wife
A. S. A. Harrison

This Is Where I Leave You
Jonathan Tropper

We Are All Completely Beside Ourselves
Karen Joy Fowler

There There
Tommy Orange

A Tale for the Time Being
Ruth Ozeki

Behind the Beautiful Forevers
Katherine Boo

Eileen
Ottessa Moshfegh
Back to Top